Under cannabis law in California, patients who meet specific requirements can obtain and use marijuana legally with a valid marijuana or cannabis card. Issued by the state in collaboration with licensed healthcare professionals, a medical marijuana card in California is a card that allows a person to buy marijuana for medical purposes. For recreational purposes, adults over 21 can use and possess cannabis. They can also give cannabis to other adults without exchange for payment, as selling cannabis is still illegal in California.

California marijuana laws changed drastically with the legalization of medical marijuana in 1996 after voters approved the Compassionate Use Act, also known as Prop 215. In 2003, Senate Bill 420 expanded protections by launching a state ID card program for medical cannabis patients.

Once again, on November 8, 2016, The state’s marijuana laws drastically relaxed for recreational use of marijuana after voters approved Proposition 64, the Adult Use of Marijuana Act. Under this law, adults 21 and over may purchase, possess, and consume up to 28.5 grams of marijuana in their private residence for non-medical purposes.

In June 2017, the state launched the Medicinal and Adult-Use Cannabis Regulation and Safety Act (MAUCRSA), which simplifies licensing requirements and clarifies medical marijuana rules. They also set up the Bureau of Cannabis Control (BCC) to regulate medical and recreational cannabis operations.

Where Is It Safe To Consume Marijuana in California?

California state law prohibits consuming any form of marijuana or cannabis in public and on publicly owned buildings or land. You are legally allowed to smoke on private property. However, property owners may ban the use and possession of marijuana on their properties. Onsite consumption is permitted inside businesses or workplaces that hold a commercial cannabis consumption license.

Consumption in a motor vehicle or bicycle is not allowed, neither while driving nor while sitting behind. Moreover, smoking cannabis within 1,000 feet of a school or educational institution is illegal. It is illegal to take your marijuana across state lines, even if you are moving to another state where the state allows cannabis.

How Much Medical Cannabis Can I Possess in California?

It is legal in California for individuals over 21 years of age to possess, purchase, or give away up to an ounce of cannabis, or 28.35 grams of cannabis, and up to 8 grams of cannabis concentrate. Adults can also cultivate up to six mature cannabis plants. A patient with a valid medical marijuana card can possess up to 8 ounces (226.8 grams) of dried cannabis or concentrates and grow up to six mature or twelve immature plants. In addition, if patients require more plants, they need to show a recommendation letter by their doctor to a law enforcement officer. Patients may grow more plants according to their medical needs.

The state launched the Medical Marijuana Identification Card Program (MMICP) to regulate the patient cannabis card with a registry to verify qualified patients and their primary caregivers. To apply for a marijuana card, an individual must have a recommendation letter from a licensed healthcare professional. Generally, these cards are valid for up to one year.

Since recreational marijuana is legal in California, adults over 21 years of age can buy it without a medical marijuana card. But the card has its benefits. They can possess, cultivate, and use more cannabis than without the cardholder. Cannabis cardholders are also exempt from paying sales taxes on marijuana purchases.

Under the California Compassionate Use Act of 1996, the people of California have the right to obtain and use marijuana for medical purposes. Where that medical use is appropriate and has been recommended by a physician who has determined that the person’s health would benefit from the use of marijuana in the treatment of

How To Get a Medical Marijuana Card in California?

Getting a medical cannabis card in California is simple and easy. All you need to follow these steps:

To get started, fill out a simple form on Greenpot MD and schedule an appointment.

Connect With a Licensed Medical Doctor and Get Evaluated

At your appointment, let your doctor know about the medical conditions you would like to treat with marijuana. If doctors agree with you, they will write you a recommendation letter with a patient ID code that registers you with the California Medical Marijuana Card Program.

The state’s marijuana laws drastically relaxed for recreational use of marijuana after voters approved Proposition 64, the Adult Use of Marijuana Act. Under this law, adults 21 and over may purchase, possess, and consume up to 28.5 grams of marijuana in their private residence for non-medical purposes.

A primary caregiver cannot apply for a cannabis card. The patient must apply for the desired caregiver. The fee for caregiving registration varies by state. Caregiver registration is valid for the same duration as the patient’s MMJ card, i.e., one year.

Since medical and recreational use of marijuana is legal in California, many laws are associated with them. However, for the use of marijuana solely for medical purposes, you need a marijuana card. People with valid MMJ cards have more benefits than those without. Greenpot MD helps many patients in the United States to treat their illnesses. Reach us to learn more and book an appointment now!

Is weed legal in Pennsylvania?

Pennsylvania recognizes the medical use of marijuana. Recreational use is not authorized and is regarded as a criminal offense per state laws.

Is Weed Legal in Oklahoma?

The state entirely prohibits the consumption of cannabis for recreational purposes. However, individuals can use it for medicinal purposes.

Is Weed Legal in Maryland?

Yes! Cannabis is legal in Maryland for medicinal purposes only. However, marijuana use for recreational purposes is still illegal.

Is Weed Legal in Ohio?

Yes! Access to weed is legal for qualified patients and their caregivers. However, Ohio doesn’t permit the adult use of marijuana. Let us dive into everything you need

Is Weed Legal in Virginia?

Yes! Weed is legal in Virginia for medical purposes. Medical cannabis in Virginia is decriminalized for qualified patients. Until 30th June 2021, the use of cannabis

Is marijuana legal in Illinois?

Yes! The access, purchase, and consumption of marijuana are legal in Illinois. But other than its legality, there’s much to focus on. 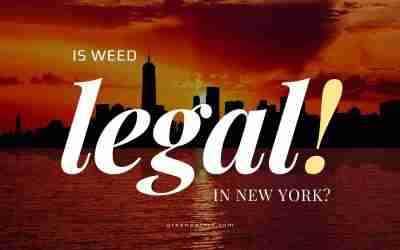 Is weed legal in New York?

Marijuana legalization has been a hot topic for years in New York State. There have been enough attempts by New York politicians to end the prohibition of cannabis.